Welcome to the official website for the
Texas Senate
Senator Royce West: District 23

High School Graduates "Where Are They Now" Questionnaire

Are you ready to buy a house? See the Mortgage Calculator

A call for change, a call for justice

Go and get your license back! 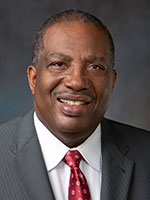 Royce West was first elected to the Texas Senate in November 1992. Since taking office he has represented the 23rd Senatorial District on behalf of the citizens of Dallas County in the Texas Legislature. During his tenure, Senator West has been named by Texas Monthly as one of the 25 most powerful people in Texas politics, been selected for the magazine's biennial "Ten Best Legislators in Texas" list, and has twice been named as an "Honorable Mention." Senator West has also received mention on the Associated Press' "Movers and Shakers" list, and Texas Insider named Senator West to its 2009 "Best Legislators" list.

On April 17, 2006, Senator West was sworn in by his fellow state senators to serve as President Pro Tempore of the Texas Senate until January 2007. As President Pro Tempore, Senator West was second in the line of succession to be Governor of Texas, and assumed the top leadership position whenever Governor Rick Perry and Texas Lt. Gov. David Dewhurst were out of the state.

Senator West is Vice Chair of the Senate Higher Education Committee and is a member of Senate committees on Administration, Education and Finance. Senator West recently joined the exclusive World Travel & Tourism Council Dallas Host Committee for the 2016 Global Summit to be held April 5-7, 2016. Senator West has been appointed to serve on the Supreme Court of Texas Permanent Judicial Commission for Children, Youth, and Families and also serves on the following national and regional organizations:

Senator West's key initiatives include the creation of college admission opportunities for all students, including the establishment of the University of North Texas at Dallas and a new law school in downtown Dallas. His legislation created the Texas Juvenile Crime Prevention Center at Prairie View A&M University; increased funding for at-risk youth programs, awarded greater compensation to victims of violent crime, established new standards for child care, enhanced enforcement of protective orders and instituted more efficient uses of criminal justice resources through legislation that created a system of progressive sanctions. During the 2009 Legislative Session, Senator West passed legislation that created a kinship care program whereby qualified relatives can receive state support to help raise children who could otherwise become part of the foster care system.

Since 1993, Senator West has sponsored the Dr. Emmett J. Conrad Leadership Program. The program has provided college students from Senatorial District 23 with paid employment in their respective fields of study. In 1996, Senator West established a Student Advisory Committee (SAC) to obtain the perspectives of junior high and high school students on legislative and community issues and to expose them to volunteer opportunities in the community.

In addition to his senatorial duties, Senator West is a partner in the law firm of West & Associates, L.L.P. He is also a caring father to his children and devoted husband to Carol R. West, CPA, as well as an active deacon of Good Street Baptist Church.

Governor for a Day Celebration
November 18, 2006

A call for change, a call for justice

Go and get your license back!