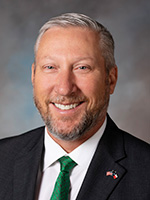 Drew, a lifelong conservative Christian, fights to preserve traditional Texas values, promote economic development, and undue burdensome regulations. Ever a fighter for the U.S. Constitution, Drew is a champion for the taxpayers, fights for Pro-Life legislation, and defends the Second Amendment. He was consistently ranked among the top conservatives during his tenure in the Texas House of Representatives.

Drew grew up in Weatherford where he attended Weatherford High School. He went on to attend Weatherford College, and then the University of North Texas where he was a letterman and received his accounting degree.

He spent fifteen years working for a Texas railcar company where he was an accountant, leasing VP, and president of three divisions. He left to join his father’s financial services company where he has specialized in agricultural managed futures for the last sixteen years and now works in securities.

Drew and his wife of 29 years, Lydia, reside in Muenster where they are blessed to have raised their three children and welcomed their first grandson in 2020. The family are active members of Sacred Heart Catholic Church where Drew serves on the finance council. Additionally, Drew has been a volunteer fireman for fifteen years.