Welcome to the official website for the
Texas Senate
Senator Robert Nichols: District 3 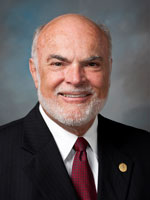 First elected to the Texas Senate in 2006, Robert Nichols represents 19 counties including the greater part of East Texas and Montgomery County.

In the Texas Senate, Nichols currently serves as Chairman of the Senate Transportation Committee. Senator Nichols also serves on the Finance, Business and Commerce, Criminal Justice, Local Government and the Select Redistricting Committees. He is a member of the Texas Judicial Selection Commission, the Legislative Audit Committee and a former Vice-Chair of the Sunset Advisory Commission.

During his eight sessions as a state senator, Nichols authored and passed legislation to protect landowners' rights, increase educational opportunities in East Texas and reform transportation policies. He has also worked to reduce Medicaid fraud and promote free-market principles. He was designated as a Top Legislator by Texas Insider, a Champion of Free Enterprise by the Texas Association of Business, a Courageous Conservative by the Texas Conservative Coalition, and a Top 10 Best Legislator for the 85th Legislative Session by Texas Monthly Magazine.

Before running for Senate, Nichols served as transportation commissioner for eight years where he established a reputation for increasing efficiency without compromising quality.

Nichols is a businessman from Jacksonville, Texas. In his hometown he served on city council, was elected mayor, built four successful manufacturing facilities, earned 32 U.S. patents and 128 foreign patents, as well as creating more than 900 jobs for East Texas families.

Working his way through college by selling fireworks and ironing clothes for other students, Nichols earned a bachelor's degree from Lamar University in 1968. He married his high school sweetheart, Donna, and they are the proud parents of three children: Brittney, Joshua, and Collynn'rae. He is a member of the First United Methodist Church in Jacksonville.